In this exhibition, Cristin Tierney brings together a group of artists who take a second look at their art through photography and video, reflecting on and re-contextualizing their work. With painting, sculpture and installation at the forefront of these artists’ work, photography is used as a tool for investigation—re-interpreting their work through a different lens.

Matt Calderwood’s video, entitled Six Sculptures, takes the viewer through a half dozen iterations of a single sculptural form, emphasizing the formal characteristics of the object itself, and the artistic process involved in realizing such an artwork. Dread Scott, like Calderwood, emphasizes the activity of the artist. His triptych of photographs takes Ai Wei Wei’s infamous performance Dropping a Han Dynasty Urn as its inspiration. Burning the U.S. Constitution takes a similarly revered historic relic and asks us to contemplate both the literal and the symbolic ramifications of its destruction. Similarly, in Malia Jensen’s video Salty, a delicately sculpted object is slowly, agonizingly and humorously destroyed by a herd of cattle. One cannot help but wonder if these bovine protagonists are stand-ins for our own equally insular flock, the international art world.

Jean Shin's photographic series, Profiles, celebrates the unsung heroes of our society whose everyday labors go unrecognized. Shin transformed each trophy's athletic pose into the unsensational, yet distinctive gesture of day-to-day work, and then printed photographs of each in a monumental size. Joe Fig's Self Portrait is a rumination on similarly mundane activities, sited in the studio of the artist. Yet another glimpse of the quotidien is provided by Simon Lee's Bus Obscura photographs, which were shot from inside city buses around the world that had been temporarily transformed into a camera obscura installation. And Alois Kronschlaeger's photographic series, B&W Concept, consists of a group of photographs, which, like those of Simon Lee, were primarily shot from inside a large-scale sculptural installation. 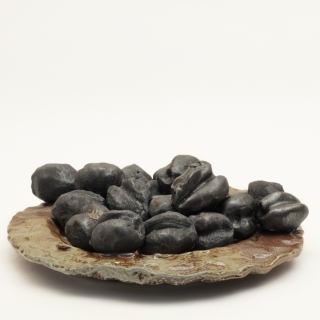