Cristin Tierney is pleased to announce an exhibition of new paintings by Jorge Tacla entitled Altered Remains, on view from October 27 until December 10, 2011. The opening will take place on Thursday, October 27th, from 6:00 pm until 8:00 pm. The artist will be present.

In his newest body of work Tacla engages the idea of social rupture, situating it at the crux of a new architecture that arises in the wake of natural and man-made disasters. Tacla perceives the devastation that results from such events as an opportunity to investigate structural systems that would otherwise remain unseen. In a painting such as Altered Remains 01, the composition is derived from images of the 2010 earthquake in Haiti. Tacla’s deliberate evocation of such a horrific event, experienced by most of us only through news reports and media outlets, forces us to consider our relationship to that catastrophe.

Influenced by the writings of the forensic anthropologist Roxana Ferllini and the Hungarian psychoanalyst Sándor Ferenczi, the artist effectively translates the pictorial space of the canvas into a psychological one. To signify such unsettled worlds he uses an obsessive pictorial language, repeating the same gesture in the same space many times until the visual register is analogous to the trauma that prompts it.

Tacla is best known for large-scale pictures, neither abstract nor figurative, but always haunted by history. Spatially complex and visually fantastic, Tacla’s paintings possess a morbid beauty and a conceptual elegance that sets them apart from the tradition of modern abstraction. The critic and scholar, Donald Kuspit, has written that Tacla’s work “stretches the limits of objective representation until it breaks down into subjective abstraction, allowing the expression of unconscious feelings that factual representation tends to repress.” 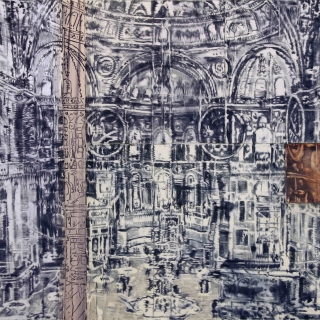