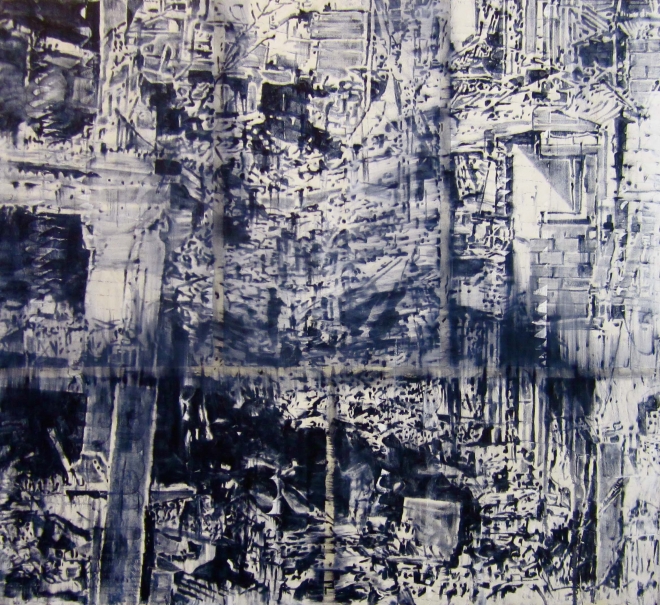 Cristin Tierney Gallery is pleased to present Hidden Identities, a solo exhibition of paintings and drawings by Jorge Tacla. This exhibition will open with a reception on Thursday, May 21 from 6:00 to 8:00 pm, and the artist will be present. Hidden Identities is the artist’s second solo show with the gallery, and it will remain on view through July 2, 2015. Included in the exhibition is a selection of works from Tacla’s recent museum exhibition at the Museo de la Memoria y los Derechos Humanos in Santiago, Chile.

Hidden Identities features a range of works from this ongoing series. With surfaces laden with wax and manipulated by brush and paint, Tacla’s paintings possess a tactile and sensuous materiality. The notebook drawings, on the other hand, are composed of sharp, decisive graphite marks and burned paper, and have a diaristic quality. According to the artist, “In the creative process there is no easy transition from the theoretical to the image itself. What one can see on the canvases are the traumas and insanity of the human condition. The materiality of these works refers to our own matter and the making of this skin, worked with cold wax, resulting in a sensitive and vulnerable place confronted with psychological and physical aggressions.”

As suggested by the title Hidden Identities, Tacla’s works explore the complexity and, at times, contradictory nature of the human condition. In Identidad Oculta 69, for example, the viewer is subsumed in a chaotic, psychologically inflected landscape marked by strong diagonals, dramatic pockets of light and shadow, and an expanse of rubble that blurs, bleeds and shifts at its edges. Tacla’s works focus on central and universal themes: the mutability of identity, collective memory, and the physical and psychological effects of trauma. Although many of the images in Hidden Identities are fragmented, falling apart, or completely destroyed, within each is the potential to rebuilt and start again. Tacla illuminates the variability of identity for victim and aggressor—an agent who is disassociated from his or her own identity—and the complexity of the assessment of guilt. These critical issues, and their situation in the larger, collective human experience, are the defining theoretical inquiries of Tacla’s oeuvre.

In 2013, Tacla completed a residency at the Rockefeller Foundation Center in Bellagio, Italy, where he continued to develop the Hidden Identities body of work. A catalogue was later produced for his solo show of this series at the Museo de la Memoria y los Derechos Humanos in Santiago, Chile. Hidden Identities will travel to the Art Museum of the Americas in Washington, D.C. in fall 2015.

For any inquiries please contact Candace Moeller at 212.594.0550 or candace@cristintierney.com.