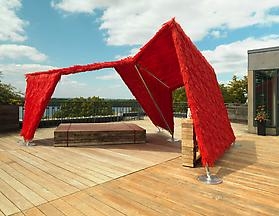 DeCordova Sculpture Park and Museum is pleased to announce Jean Shin and Brian Ripel: Retreat on view September 2–December 30, 2012. Collaborators, Jean Shin and Brian Ripel are known for their large-scale accumulation installations that transform everyday objects into elegant expressions of identity and community. At deCordova, Shin and Ripel will investigate the concept of social retreat through three complementary installations. Their participatory Tea House, installed on deCordova’s Rappaport Roof Terrace is the first of the three site-oriented projects, and opened to the public June 17. The subsequent installations, Castles in the Air and Depths of his own Nature, will be exhibited in the Museum’s fourth floor Foster Galleries this fall.

From June 17–August 12, Museum visitors are invited to visit the Tea House and participate in the act of retreat by escaping to deCordova’s idyllic rooftop to enjoy a cup of tea. The Tea House is a glowing red, planar structure made of hundreds of thousands of drink stirrers in stitched panels that resemble traditional thatched roofing. It is at once a sculpture, a site for serving and sipping tea, as well as a functional structure designed to collect tea bags. Thousands of tea bags used by Museum visitors and hung to dry in the Tea House, will be collected and incorporated by the artists into a large-scale project in the Museum this fall. Aside from being material for a future installation, the tea bags amassed this summer are also a reflection of the deCordova community that convened to participate in this project.

Tea will be served in the Tea House on Wednesdays, Thursdays, and Fridays from 12–3 pm and on Saturdays and Sundays from 12–2 pm through August 12, weather and staff permitting. The Tea House will be on view through November.

Shin and Ripel’s interest in retreat was inspired by the local historical examples of Henry David Thoreau’s move to nearby Walden Pond in 1845 and Julian de Cordova’s summer escape to Flint’s Pond in 1882. Thoreau’s cabin (Concord, MA) and de Cordova’s castle (Lincoln, MA) are architectural embodiments of idealized escapism. Built on hilltops overlooking bodies of water, the log cabin in Concord and the mock European castle in Lincoln, symbolize two different utopian visions of retreat. In the three installations that comprise Retreat, Shin and Ripel engage with the materials and objects that made these physical and psychological refuges possible, pencils and tea. Building from Thoreau’s familial connection to the pencil industry— Henry David worked for his father’s pencil manufacturing business, and de Cordova’s profession as a tea broker—Shin and Ripel address local cultural and industrial histories through the language of art and architecture.

In September, Shin and Ripel will repurpose the dried tea bags accumulated this summer in the Tea House into material to construct an inverted string model of the Museum’s building, titled Castles in the Air. Inspired by the hanging chain models of Spanish architect Antoni Gaudí, the intricate web of strings and tea bags will produce an inverted ghostly architecture illustrating the structural forces responding to gravity. Julian de Cordova sought to create a worldly escape from his New England reality by dressing his hilltop estate in the exotic architectural trimmings of Europe. By replacing Gaudí’s weighted pellet bags with tea bags, the artists consider the role of tea in the Museum’s history, its historic and symbolic import in the Boston area, as well as its long tradition as a material bridge between cultures.

In the adjacent gallery, Shin and Ripel will reimagine Henry David Thoreau’s 1846 survey of Walden Pond in a 21-foot graphite pencil drawing spanning across thirty reclaimed timber planks. The room-scaled installation, Depth of his own Nature, refers to Thoreau’s connection to the American pencil industry, his profession as a land surveyor, as well as his better known legacy as author, philosopher, and naturalist. The measurements from Thoreau’s original survey will be projected into space, producing an imagined perspectival view of Walden Pond in the installation. Through the repetitive and solitary act of drawing, Shin and Ripel transform Thoreau’s survey, like Gaudí’s hanging model, into another mode of mapping place and space.

Through these three installations, Shin and Ripel consider the various strategies of retreat. Both the castle and the cabin are manifestations of a similar impulse to escape, and the artists employ this architectural language and material history, to create a refuge and a space for reflection for the Museum visitor. While engaging the Museum community, Retreat broadly considers architectural form and the landscape as a physical embodiment of personal, philosophical, and psychological utopia.

Jean Shin was born in Seoul, South Korea and raised in the suburbs of Washington DC. She attended the Skowhegan School of Painting and Sculpture in 1999 and received a BFA and MS from Pratt Institute in Brooklyn. Her work has been widely exhibited in major national and international museums, including solo exhibitions at the Scottsdale Museum of Contemporary Art in Arizona (2010), Smithsonian American Art Museum in Washington DC (2009), the Fabric Workshop and Museum in Philadelphia (2006), and The Museum of Modern Art in New York (2004). Site-specific permanent installations have been commissioned by the US General Services Administration Art in Architecture Award, New York City’s Percent for the Arts and MTA Art for Transit. Shin has received numerous awards, including the New York Foundation for the Arts Fellowship in Architecture/Environmental Structures (2008) and Sculpture (2003), Pollock-Krasner Foundation Grant, and Louis Comfort Tiffany Foundation Biennial Art Award.

Brian Ripel is an architect and founder of RSVP Architecture Studio, located in Brooklyn, NY. Brian is a frequent collaborator with Jean Shin, having exhibited site specific projects at the Museum of Glass in Tacoma, Washington, the Scottsdale Museum of Contemporary Art, the Dorsky Gallery, the Brooklyn Public Library, among others. His architectural projects have been featured in the New York Times, Interior Design magazine, Monument, Architect Magazine and the Architect’s Newspaper. Brian is an Adjunct Assistant Professor at Pratt Institute, in the undergraduate architecture program. He received his Master of Science in Advanced Architectural Design from Columbia University and his Bachelor of Architecture from Pratt Institute.

Artist Talk: Jean Shin
Saturday, October 6, 2 pm
Meet one of the artists behind the three-part installation, Retreat, which is rooted in the retreats created by Julian de Cordova in Lincoln and Henry David Thoreau in Concord. Free with Museum admission.

General Information
DeCordova is open Tuesday through Sunday, from 10 am to 5 pm and on select Monday holidays. To coincide with the new Strategic Plan, the cost of admission has changed to the following: $14 for adults, $12 for seniors, $10 for students (ages 13 and up), and Free for children 12 and under. Members, Lincoln residents, and active duty military personnel and their families are admitted free of charge with proper ID. Admission is FREE to all the First Wednesday of each month. The Sculpture Park is open year-round during daylight hours. Guided public tours of the Museum’s main galleries take place every Thursday at 2 pm and Sunday at 2 pm. Tours of the Sculpture Park are given on Saturday and Sunday at 1 pm from April to November. All guided tours are free with Campus admission. Visit decordova.org or call 781.259.8355 or further information.