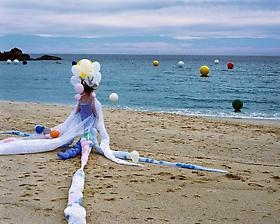 Janaina Tschäpe: Floating Worlds is a survey of the artist's video work from 2000 to 2014. Tschäpe is well known for work in a wide range of media: large scale drawings, paintings, cut paper relief sculptures, photography and video. Her video works can be found in the collections of the Centre Pompidou and the Guggenheim Museum among many other public and private collections, but never before has an exhibition focused solely on a retrospective view of the video work exclusively.

Weaving in and out of quasi-narrative and lyrical spatial disjuncture, Tschäpe's video work animates the long-standing themes that circulate throughout her work: the female body as a projected site of desire and distortion, human evolution and our inability to cognitively grasp the actions which formed us, cosmology and mythology, scale shifts from the micro-organic to the cosmic and water as the wellspring of life. The exhibition will debut her more recent work filmed in the Galapagos Islands, a rich and contested site in the history and mythology of evolutionary discourse.

Naomi Beckwith, Curator at the MCA, Chicago, chose Tschäpe's The Ocean Within (2013) as one of the "ten best must see" works at Expo Chicago. Tschape's video work is in the collections of the Centre Pompidou in Paris and the Guggenheim

The title Floating Worlds references the liminal social spaces of Edo period Japan, both the otherworldly sites of bodily pleasure and the Buddhist notion of a "sorrowful world" of cyclical death and rebirth on the earthly plane, themes that flow throughout Tschäpe's work.