Cristin Tierney Gallery is pleased to present Lorser Feitelson: Curvilinear, an exhibition of the artist’s line paintings from 1963-69. Curvilinear is the gallery’s first solo exhibition of Feitelson’s works, and the artist’s first solo show in New York in over ten years. It opens on Tuesday, April 24th and continues through Friday, May 25th. A private reception will be held during Frieze Week on Thursday, May 3rd from 6:00 to 8:00 pm.

Lorser Feitelson was a Los Angeles-based artist whose career reads as a mini-art historical survey, moving from Cubism and Post-Surrealism to biomorphic abstraction, hard-edge abstraction, and beyond. Spurred by the creative freedom that Los Angeles offered, with its lack—at the time—of an established arts scene, Feitelson produced a wildly original body of work that is equal in importance to the early contributions of east coast contemporaries such as Ellsworth Kelly, Helen Frankenthaler, and Morris Louis. A critical member of the “Abstract Classicists,” he was part of a group of artists that championed geometric abstraction and arts cultivation in LA, setting the city on the path to becoming the modern arts destination that it is today.

Between 1963 and 1969, Feitelson produced a series of paintings that showed the range of experimentation possible with a single compositional element: the line. Straight or curving, of uniform or tapered width, the lines in these works demonstrate the artist’s preoccupation with the relationship of the “container to the contained.”[i] In each painting he employed lines with minimal stylization to define the space inside the four edges of the work. In Untitled (December) from 1969, two deep red lines—one uniform, one not—arc across the pale field of the canvas to the edges, where they extend over the sides. At times the lines come close to each other, and at others they curve away. Their proximity creates a tension bordering on sensual—a suggestion that Feitelson acknowledged in these works while also encouraging other associations. Seemingly simple in composition, line paintings like Untitled (December) were in fact precisely arranged to be self-sufficient: complete artistic statements with everything needed for interpretation contained within the picture.

There are several different types of line paintings presented in Curvilinear: some feature central, narrow fields of color while others have flat unmodulated backgrounds; some contain only uniform lines, or lines with sharp spikes, or “claws,” as Feitelson called them; and others have thick, curving lines of multiple colors that bend together in a gentle sway. Despite these stylistic differences, all are notable for their compositional sparsity, precise edges, and flat areas of color. Their sloping curves create paths for the eye to travel up and down and across the paintings, making lolling, rhythmic loops. Shooting upward, they instill a sense of ascension and even Baroque drama. Some paintings are executed in oil, or oil and enamel, while others are in acrylic, a medium that Feitelson embraced beginning in the ‘60s. This array of materials, like the diversity of approaches with which Feitelson explored his elemental subject, underscores the artist’s formalist rigor and devotion to addressing what makes a painting a painting. Curvilinear illuminates Feitelson’s role in the development of American abstract painting. This contribution is made all the more important by a previous generation’s omission of the west coast from conventional art historical narratives.

Lorser Feitelson (1898-1978) was a leading figure in Los Angeles abstraction, and his work has been included in many institutional exhibitions on California art. In 1959, his work was featured in the landmark exhibition Four Abstract Classicists at the San Francisco Museum of Art alongside John McLaughlin, Frederick Hammersley, and Karl Benjamin. More recently, Feitelson and the Abstract Classicists were included in the Orange County Museum of Art’s 2007 touring exhibition Birth of the Cool: California Art, Design and Culture at Midcentury. In September 2011, Feitelson’s work was featured in the Getty Museum’s Pacific Standard Time, and was also included in the exhibition’s transfer to the Martin Gropius in Berlin in March of 2012. His works are held in the permanent collections of the Los Angeles County Museum of Art, the Smithsonian American Art Museum, the San Francisco Museum of Modern Art, the Whitney Museum of American Art, and numerous other public and private collections.

Cristin Tierney Gallery is pleased to host Lorser Feitelson: Curvilinear in conjunction with our presentation of Helen Lundeberg at Frieze. Lundeberg was a central figure in LA’s art scene, and also Feitelson’s wife. Her paintings from the 1960s, with their ambiguous figure/ground relationships and reductive forms, represent the crystallization of the hard-edge abstract style being pioneered at that time on the west coast. These works will be on view in booth #SP24 in the Frieze fair’s Spotlight section from May 2-6, 2018. 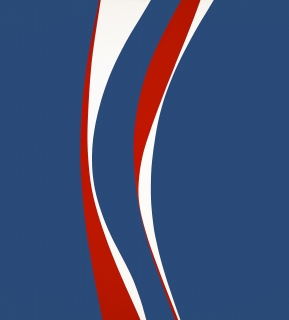