Cristin Tierney Gallery is pleased to present Overview Effect, an exhibition of new video work by Janet Biggs. It opens on Thursday, June 6th with a reception from 6:00 to 8:00 pm, and the artist will be present. Overview Effect ends on Friday, August 2nd.

Biggs’ exhibition is split into two distinct installations: the first, from June 6th through the 30th, will feature the three-channel installation Weighing Life Without a Scale. From July 8th through August 2nd, the gallery will present the single-channel video Seeing Constellations in the Darkness Between Stars. This will be the US debut of both works, which premiered in November 2018 in Tenerife at the Museo de la Naturaleza y el Hombre and the Museo de la Ciencia y el Cosmos.

The term “overview effect” refers to the cognitive shift reported by astronauts who have seen Earth from space. Witnessing the relative smallness of our planet, they feel a stronger connection to the whole of humanity, independent of national boundaries or ideological camps. While drawn to the optimism of this viewpoint, Biggs examines complexities in both the macro and the micro perspectives. Both videos in Overview Effect are from Biggs’ Mars series, which revolves around footage the artist shot while completing a residency at the Mars Desert Research Station (MDRS) in Hicksville, Utah. At the MDRS, international crews of scientists and engineers undergo simulated experiments and training to prepare for colonization of the red planet. Biggs, whose previous expeditions include such far-flung locations as sulfurous volcanoes in Indonesia, Arctic glaciers, acidic salt flats and volcanoes in the Afar Triangle, an underground salt crystal cave in Germany, and the frozen Nepal Himalayas, is no stranger to extremes. With this “journey to Mars,” she furthers her search for hope in some of the most challenging, high-stakes environments known on earth. Although chaos and the threat of extinction are undeniably present in each site, Biggs’ work offers glimpses of beauty, transformation, and otherworldliness—in other words, proof of life.

Weighing Life Without a Scale, screening from June 7th through the 30th, is a resulting project from Biggs’ 2018 Guggenheim Fellowship. It combines images from the Mars Desert Research Station, a Yemeni refugee camp in Djibouti, Ethiopian migrants, observatories in the Canary Islands, and a Rover’s video recording of the planet Mars. Disparate at first glance, each location is linked by the theme of human movement: Ethiopia’s drought pushing out its people; Yemenis escaping war, corruption, famine, and disease; and humanity’s cannibalization of Earth driving the quest to go to Mars. The massive destruction that people have wrought on each other and on the planet is inescapable from scene to scene. Biggs doesn’t neglect this, panning long shots over arid desert and airless camps, but she also does not ignore small opportunities for splendor. As a young girl in the Djibouti camp sings at the end of the video, “Our hope will grow as we grow up and the world will tell our story.”

The second half of the exhibition, July 8th through August 2nd, will feature the video Seeing Constellations in the Darkness Between Stars. It is set to a soundtrack created by Jason Barnes, a drummer fitted with one prosthetic arm with two drumsticks: one that he controls, and one programmed with AI to respond to the other stick’s rhythms. Jason and the AI listen to and build from each other’s strikes, creating an aural backdrop that is collaborative but not strictly manmade. Biggs intersperses shots of Barnes drumming with footage of the Mars Society’s University Rover Challenge, an annual competition in which rover-like robots designed by international teams race to complete a series of tasks. At the apex of the video, just as Barnes’ drumming builds to a crescendo and then stops, one of the robots topples over and tumbles down a hill. The complicated link between man and machine—a nebulous one, with perhaps as many connections as there are heavenly bodies between stars—is most evident here, when Barnes is sitting quietly sans prosthesis and the robot’s human team are running down the rocky slopes to right the vehicle. Similar to Weighing Life Without a Scale, it underscores that even when focused on something as complicated as climate change or as far away as outer space, Biggs’ perpetual subject is the human element.

Beginning July 8th, the gallery will be open for summer hours of Monday – Friday, 10:00 to 6:00 pm. We will close for the month of August on Saturday, August 3rd, reopening after Labor Day.

June 11, 9:00 am to 5:00 pm – symposium The Role of Art in the Environmental Crisis, Christie’s Education*
*for more information and ticketing, please contact newyork@christies.edu. 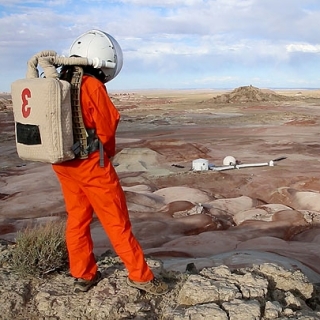 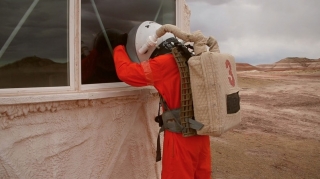 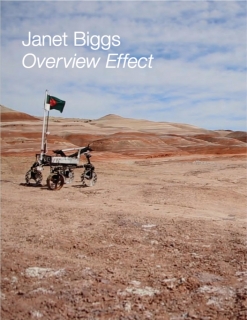 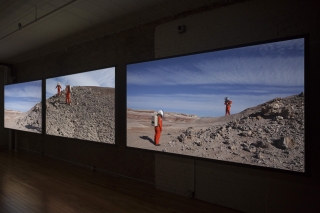 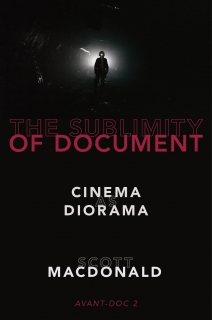 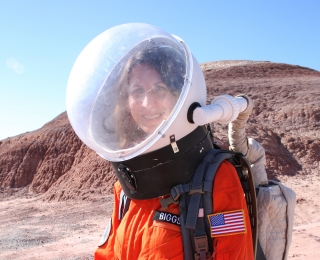 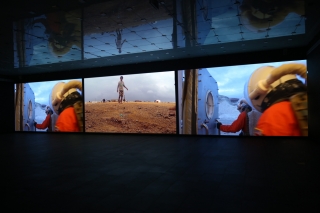 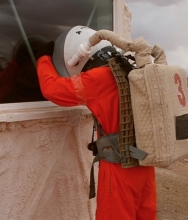 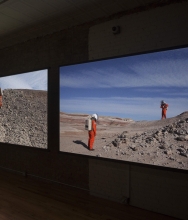